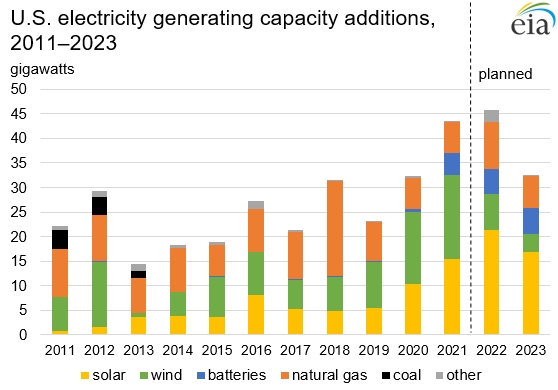 Renewables to see continued momentum in 2022 and beyond – US grid operators are expected to add more solar capacity in 2022 than other generation sources as states and utilities take it upon themselves to drive the clean energy transition. New capacity from wind, solar and batteries is expected to surpass 30 GW in 2022, according to S&P Global Platts Analytics’ North American Electricity Short Term Forecast. Across the US, there is expected to be 15.5 GW of new solar, 11 GW of new wind and 4.2 GW of batteries added in 2022. The US Energy Information Administration (EIA) projects renewables’ share of US electricity generation mix to double by 2050 to account for 42% of the market share, according to the EIA’s Annual Energy Outlook 2021. EIA also projects 78 GW of generating capacity additions in 2022 through 2023, of which 62% will be large-scale solar and storage.

Battery Storage Soars on U.S. Electric Grid – The U.S., which had less than 1 GW of large battery installations in 2020—roughly enough to power 350,000 homes for a handful of hours—is on pace to add 6 GW this year and 9 GW in 2022, according to S&P Global Market Intelligence. California is driving much of the U.S. battery market’s expansion. It is racing to secure power to make up for the impending closure of several gas-fired power plants as well as a nuclear facility that provides nearly 10% of the electricity generated in the state. At least eight other states so far have storage mandates or targets, including New York, Virginia and Nevada, according to the U.S. Energy Storage Association. Goldman Sachs expects the U.S. market for stationary batteries to grow from about $1 billion in 2020 to $13 billion to $14 billion by 2030.

US utility-scale solar, storage prices drop over 12% in past year, but supply chain worries loom: NREL – The installed cost of solar photovoltaic (PV) and battery storage systems continued to drop between 2020 and 2021 in the U.S., with utility-scale solar systems seeing a 12.3% price decline, according to a new report from the National Renewable Energy Laboratory (NREL). The cost of residential PV fell 3.3% and commercial rooftop PV systems dropped 10.7%, the report found. The calculations rely on a bottom-up model that accounts for all costs during installation, including hardware, sales prices and labor. The report found that balance of system costs – encompassing everything except the PV panel – had either increased or remained flat, but an overall 19% reduction in module cost drove the cost declines. A separate NREL report examined various types of PV technology and found potential cost savings for each.

The Energy Transition Show – Episode 161: Expanding Transmission – Liza Reed, the research manager for low carbon technology policy at the Niskanen Center in Washington, D.C., an expert in High Voltage Direct Current, electricity transmission explores more on how to get transmission projects moving in the US. The episode also delves into whether a macro grid based on big transmission lines are still the cheapest and best solution (considering renewable potential is far removed from load centers), or if more distributed solutions might be worth reevaluating in light of updated cost data and grid modelling. The episode discusses difficulties in financing, cost sharing, siting, permitting, and the implementation timeline of transmission projects’ execution.

Columbia Energy Exchange: What’s Next After COP26? – Host Jason Bordoff spoke with economist Nat Keohane who was recently named President of the Center for Climate and Energy Solutions. The episode speaks on the successes of the conference, including the final details of the so-called “Paris rulebook.” The challenges that will carry over to next year’s conference and beyond are also discussed, including global climate diplomacy and coordination in execution as well as setting measurable accounting standards that avoid double counting.