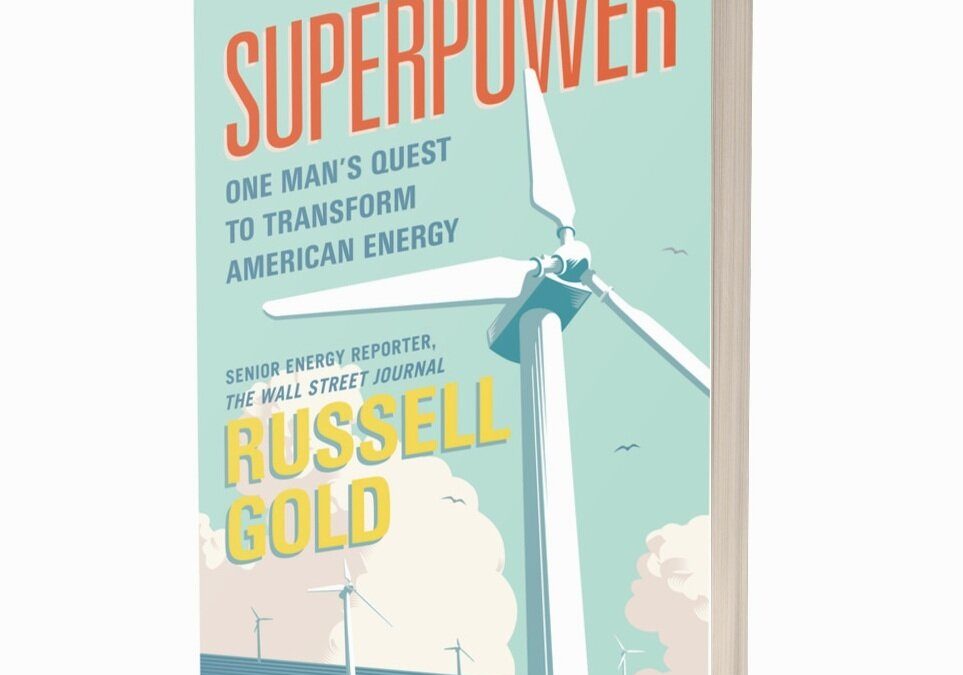 Superpower: One Man’s Quest to Transform American Energy by Russell Gold details the 8-year journey of Michael Skelly and the Clean Line company to build a massive electricity transmission line across America. Along the way, Gold introduces a colorful cast of characters, weaves in fascinating lessons on the electric grid’s evolution in America, and guides the readers towards a conclusion that our transition to a renewable-based future is dependent on investments to upgrade our aging transmission infrastructure.

In the early 2000s, Michael Skelly worked at Zilkha Renewables as the Chief Development Office. These were the early days of financial success for renewable energy and he helped build a portfolio of nearly 4,000 MW of wind projects in various stages of development. The portfolio was successfully sold to Goldman Sachs in 2005, where it continued to grow and evolve.

Several years later, Skelly started Clean Line with a grand vision: privately finance a 700 mile high-voltage, direct current transmission line to bring supply from the renewable-rich Oklahoma panhandle to a hub in Tennessee, where it could branch out to serve East Coast demand. Massive infrastructure investments traditionally involved utilities, with a guaranteed rate of return on investments, and the government, through its constitutional authority to exercise eminent domain. Skelly’s start-up had neither of these inherent advantages, but did have a passionate crew, private funding, and a shot to do something that had never been done.

Gold, who is a senior energy reporter for the Wall Street Journal, provides broader historical context throughout the story. From Edison’s invention to the early failures of wind deployment, the book is dotted with snippets of America’s electrical history. Government policy seems intertwined in each lesson, none more so than the long history of tax policy promoting energy sources.

In 1916, tax breaks for oil and gas developers allowed for supply to keep pace with growing energy demand. By the end of the ‘70s, federal subsidies covered an estimated 35% of the cost of generating nuclear power. The ‘80s saw policy encourage natural gas exploration in unconventional places such as shale formations, a driver of the fracking boom that would follow. Today, wind and solar tax credits along with state-level policy continue this long arc, helping spur growth in the renewable sector and following the historical path of previous energy sources.

As the renewable sector reaches maturity, future policy will continue to play an outsize role on the energy sector. Early signs point towards policy incentivizing complimentary technologies, including battery storage. But what else? Gold ends the book by directly stating his own conclusion that he’d guided readers towards throughout the book: America must either invest in transmission infrastructure to efficiently move electricity across the country, or risk stymying our progression towards a renewable future. In the same way that Eisenhower’s interstate highway system overlaid the existing and congested two lane roads, direct current transmission lines would co-exist with the current alternating current infrastructure. This would allow the grid to operate efficiently while matching solar and wind supply with coastal electricity demand.

The Clean Line project was a risky proposition from the start. A $50 million budget for early permitting foretold of the regulatory risk to come as they worked to win over local town halls, negotiate land leases, and navigate agreements with utilities. The Clean Line team worked at it for 8 years, overcoming each obstacle, eventually winning approval for a federal government partnership and having the project shovel-ready by 2015. Ultimately, they were unable to overcome some final political and regulatory hurdles.

While the project was never built, the journey itself paved the way for future infrastructure projects. Several utilities have since built high-voltage direct current lines, expanding on the work Clean Line did and using similar routes. Legal rulings related to the Clean Line project now serve as guidance for future, privately-financed infrastructure projects. Many of the Clean Line employees continue to use their experiences to make an impact in the renewable energy sector.

Skelly and his team of trailblazers went into their adventure clear-eyed about the challenge ahead. Skelly, hardened from past experiences moving an idea into execution, would often jokingly reference his “5 Stages of Project Development”. The 1st stage is euphoria, as excitement builds around the project. That is quickly followed by the harsh reality of the 2nd, 3rd and 4th stages; despair, the search for the guilty, and the punishment of the innocent. The 5th and final stage ends with riches and glory for the uninvolved.

Coincidentally, this framework was clairvoyant in predicting the fate of the Clean Line project. While the Clean Line was never built, the journey leaves behind a legacy and lessons learned for the broader journey to a renewable-based future.