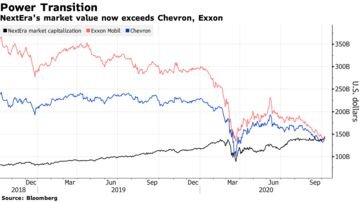 Speaking via video link to the United Nations General Assembly (UNGA) in New York on Tuesday, Chinese President Xi Jinping called for a “green revolution” and said the country will scale up its targets under the Paris climate accord — a pledge by 187 countries to reduce their carbon emissions. Xi said China aims to reach peak carbon emissions by the end of the decade and achieve carbon neutrality in 40 years. It’s the first time China has issued concrete plans to achieve net zero carbon dioxide emissions.

Bloomberg: $11 Trillion of Investment in Green Energy by 2050

Green power is set to draw around $11 trillion of investment in the coming decades as the cost of renewables plummets and more of the world’s energy comes from electricity. That’s the latest analysis from BloombergNEF in its annual New Energy Outlook report. It’s further evidence of how cheap renewable power sources will continue to push aside fossil fuels in the energy mix. Despite the massive sum, BNEF said the pace of building out new renewables will need to increase further to limit global warming to less than 2 degrees Celsius by the end of the century.

NextEra Energy, the world’s largest solar and wind power generator, has surpassed ExxonMobil in market value, jumping from a $32 billion valuation in October 2010 to more than $145 billion on Wednesday.

U.S. corporations will be responsible for nearly 20% of all utility-scale renewable power capacity additions over the next decade, a new study found. IHS Markit released a new report titled “Corporate U.S. Renewable Procurement Outlook: Optimism Amid a Pessimistic Year,” which estimates that corporate-driven PPAs in the U.S. will be responsible for 44 to 72 GW of new wind and solar capacity in the country between 2021 and 2030. This would represent an average of about 4.4 to 7.2 GW per year with a 45% annual increase in installations expected to come from corporate procurement in 2020.